At the invitation of the American School of Oriental Research’s Temple of the Winged Lion Conservation Project, the University of California San Diego’s Center of Interdisciplinary Science for Art, Architecture and Archaeology’s IGERT researchers participated in a world-wind round of data collection at the UNESCO World Heritage and archaeological wet-dream site of Petra.

Located in the Sharra mountains to the southeast of the UCSD Edom Lowlands Regional Archaeology Projects in Wadi Faynan, Petra is one of the most gorgeous and well recognized sites around the world. A labyrinthine landscape of canyons dotted with carved cliff tombs, Petra is famed for its architectural edifices and for its pop cultural stake as the home of the Holy Grail in Indiana Jones and the Last Crusade.

Though local Nabataean architectural styles were adapted and continued throughout the ebb and flow of Roman control of the region, the Roman’s also influenced the construction of several standing buildings along a central open procession way. Many of these have been excavated over the past century, among them the Temple of the Winged Lion and the Byzantine Mosaic Church of Petra. As fragile standing structures, sites of this nature require additional care. The mosaics of the Byzantine church recently went through a refreshing and well done round of conservation and had a tent system deployed above the most delicate areas of the site. But the best preservation solution for the excavations of the temple workshops surrounding the Temple of the Winged Lions is to not display them- but to backfill them. And thus, the Temple of the Winged Lions conservation project asked the UCSD team if they could contribute to the imaging and digital documentation of the temple and its environs.

Vid Petrovic & Leah Trujillo with the Leica ScanStation 2 in front of the Temple of the Winged Lions at Petra.

With the fabulous aid of Leah Trujillo and Claire McConnell, the scanning contingent lead by moi (Ashley M. Richter) utilized our speed scanning methodologies to rapidly collect a point cloud of the Temple of the Winged Lions. Meanwhile Vid Petrovic and CISA3 researcher David Vanoni undertook the rigorous photography on site to build an SfM model. 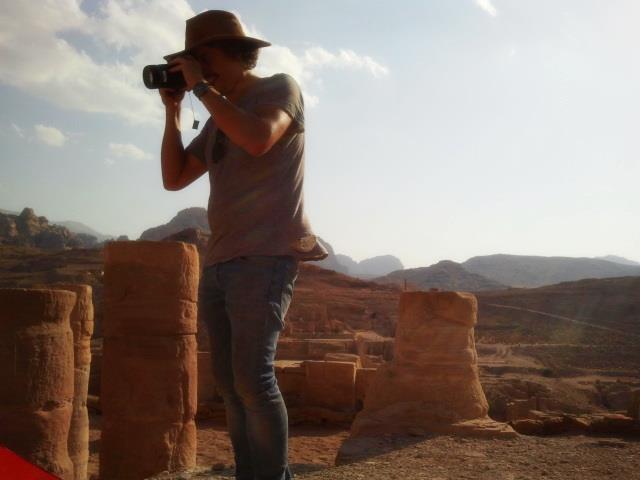 Vid Petrovic imaging the interior of the Temple of the Winged Lions at Petra.

During the time it took the IGERT ELRAP aerial balloon platform to photograph the Temple of Winged Lions from above, the modelling teams also took on the challenge of collecting a quick point cloud of the interior of the nearby Byzantine Mosaic Church. A fascinating blend of iconography, the two side aisles of mosaics in the church are well preserved examples of the changing religious and philosophical beliefs of the local area and its influx of pilgrims during the early Byzantine period. With digital models like those created by the team, it was hoped that part of the ever increasingly quicker data collection,-processing,-and-analysis pipeline for such data could be utilized by conservators to map out the complex tapestry of mosaic tesserae. 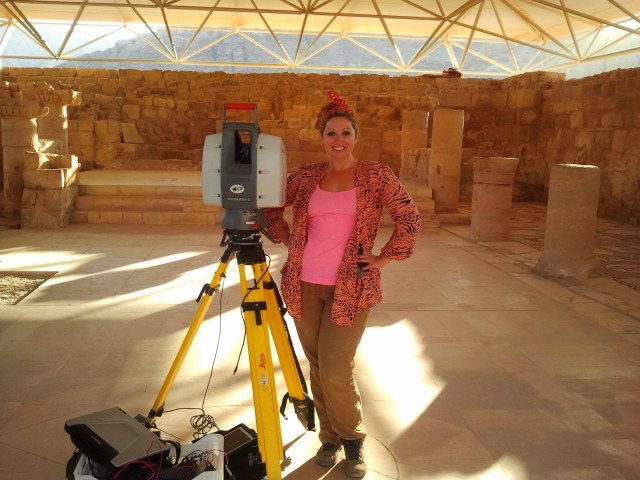 Ashley M. Richter with the Leica Scanstation 2 in the Byzantine Mosaic Church at Petra.

It was an honor and a privilege for us to work at Petra for the wonderful teams who are diligently and fabulously working to preserve and promote such a fantastical archaeological monument. Petra is one of those places that definitely deserves to be on everyone’s bucket list. It deserves to be explored by children of all ages interested in experiencing one of the most gorgeous and existentially fulfilling sites humankind has ever crafted in collaboration with nature.

An overview of the IGERT efforts was published by the project’s lead professor in Antiquity.

2 thoughts on “Point Clouds at Petra”