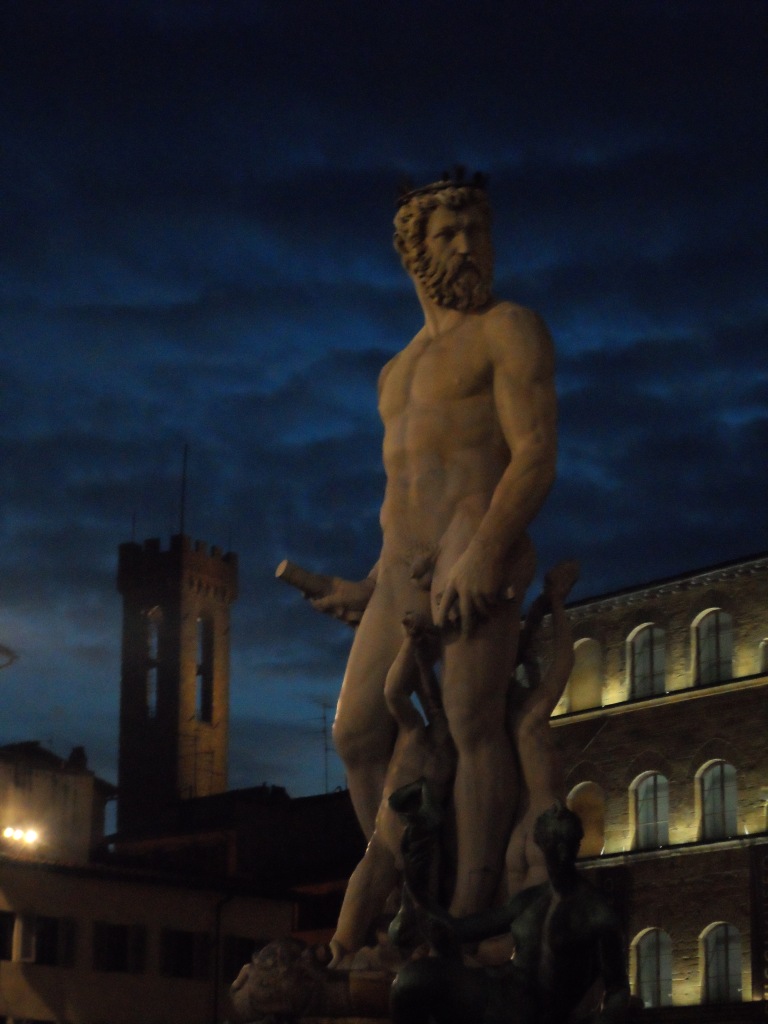 Close up of the Poseidon fountain outside Palazzo Vecchio at dawn.

Palazzo Vecchio is the site longest associated with my former research group at the Center of Interdisciplinary Science for Art, Architecture, and Archaeology (CISA3) at the University of California, San Diego.

Infamously, part of our team, including my collaborator and co-blog focus Vid Petrovic, helped Palazzo Vecchio authorities hunt for the lost Da Vinci mural believed to be concealed behind the modern walls the Hall of the 500. The initial survey for the project starring our emeritus director Maurizio Seracini, Vid, and others from our lab, was captured by National Geographic. Check out more on the NatGeo project page, and watch the documentary (its quite awesome and details many of the pesky problems that crop up and have to be surmounted during a cultural heritage diagnostic field season). 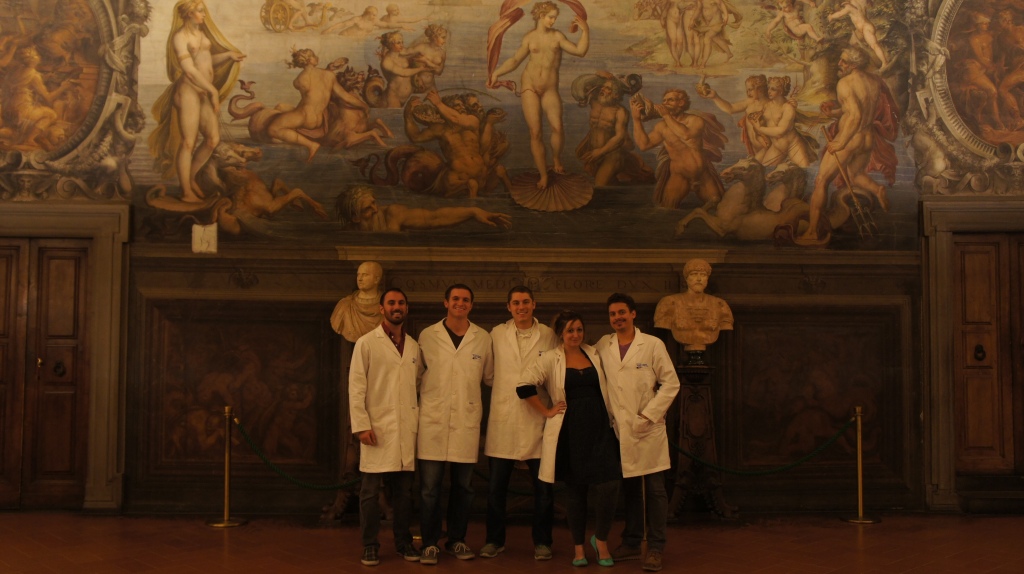 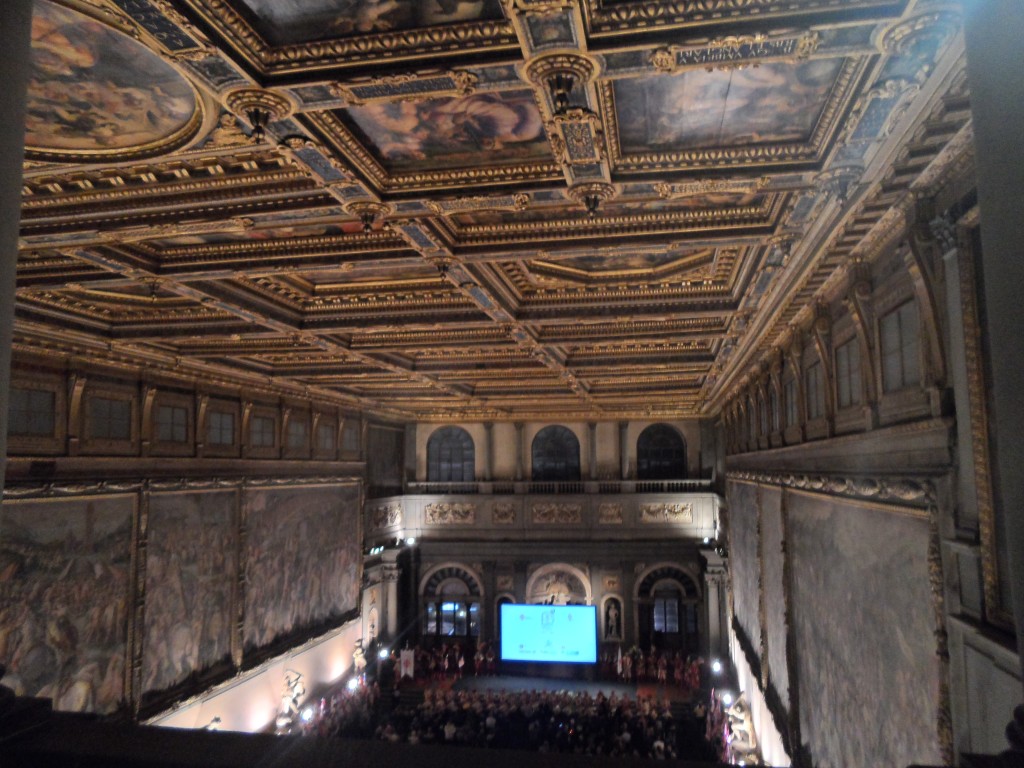 Throughout some of our fieldwork on the upper floors, a local medieval music festival raged in the Salone dei Cinquecento (the Hall of the 500)–the focus of previous team investigations.

While the Da Vinci hunt was on-going, a smaller CISA3 team was investigating the state of decay of another treasure in Palazzo Vecchio: its Apartment of the Elements. With cracking murals and a rapidly sloping floor–the local conservators are in need of further structural information to gage future solutions.

This most recent field season, CISA3 wanted to expand those efforts by adding to the digital temporal record of the site, so that the point clouds and thermography of the rooms from the 2011 and 2013 seasons could be compared against each other to track changes. AND we wanted to expand our digitization efforts in general, and capture more of the site via laser scanning to expand the digital archive, photorealistic properties, and its temporal scanning analytical potential. 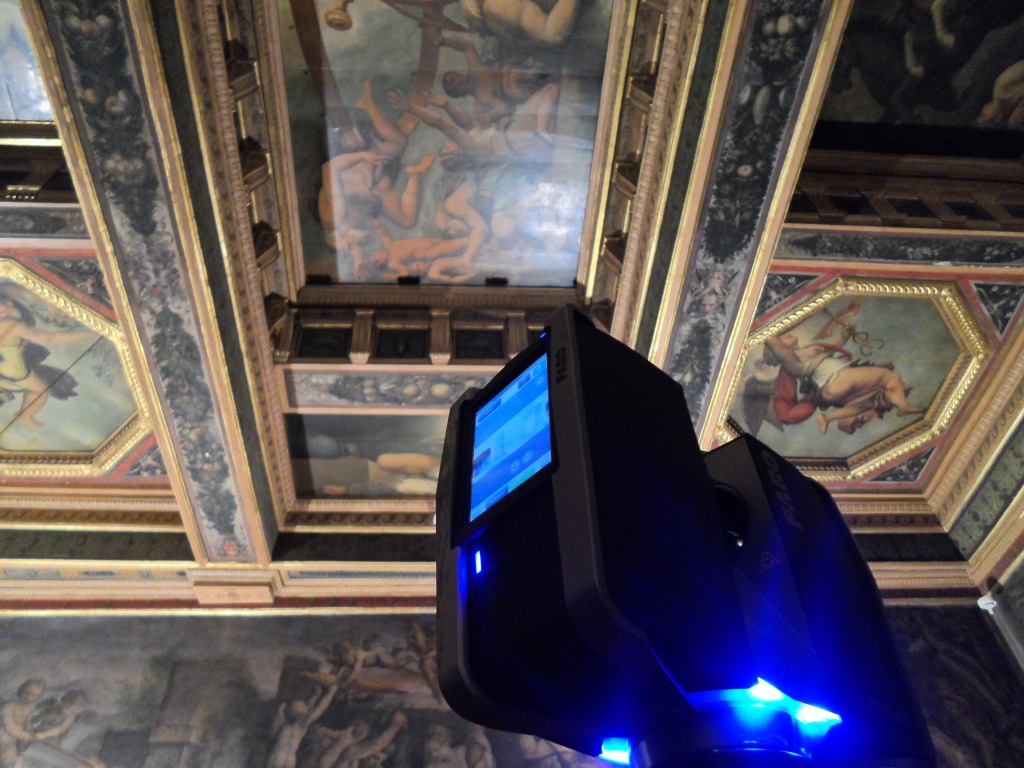 The Faro in the Room of the Elements in Palazzo Vecchio. 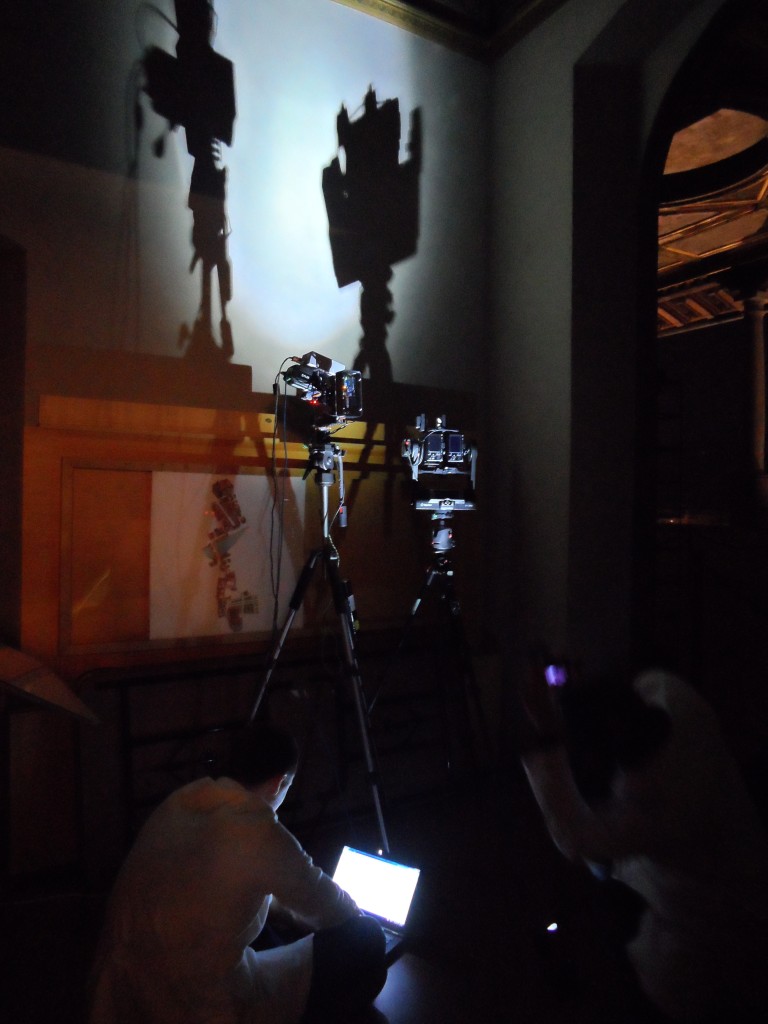 On-going Thermography of the outer walls of the Room of the Elements. 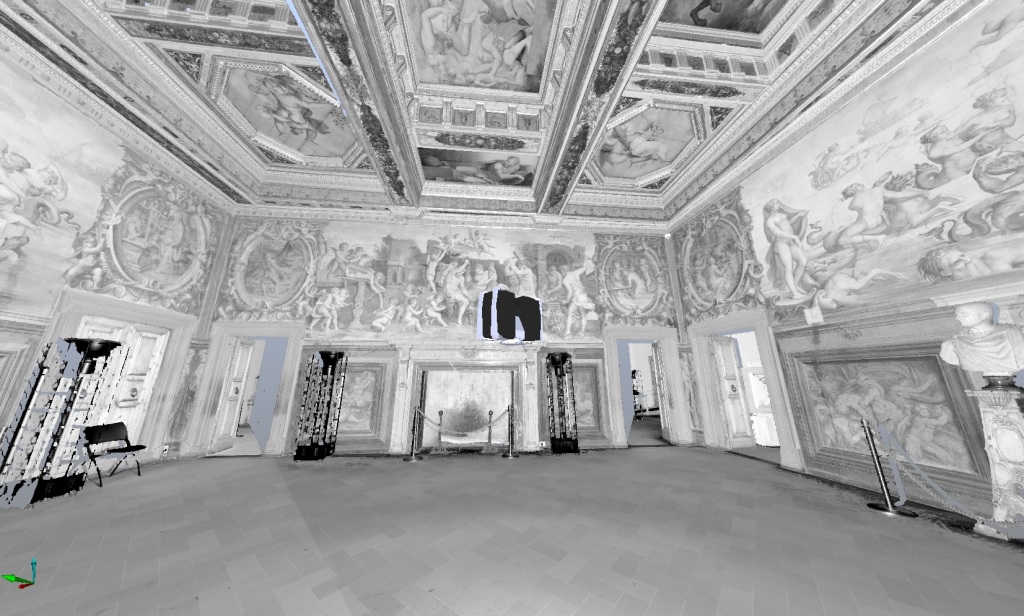 A screenshot of an interior laser scan of the Room of the Elements in Palazzo Vecchio.

So as part of this season, in addition to my re-scanning the Apartment of the Elements, Vid undertaking high resolution photography of its central room to expand his research on color texturing in 3D modelling, and our colleague Mike Hess undertaking thermography of the same central room—we also tackled a series of new projects. 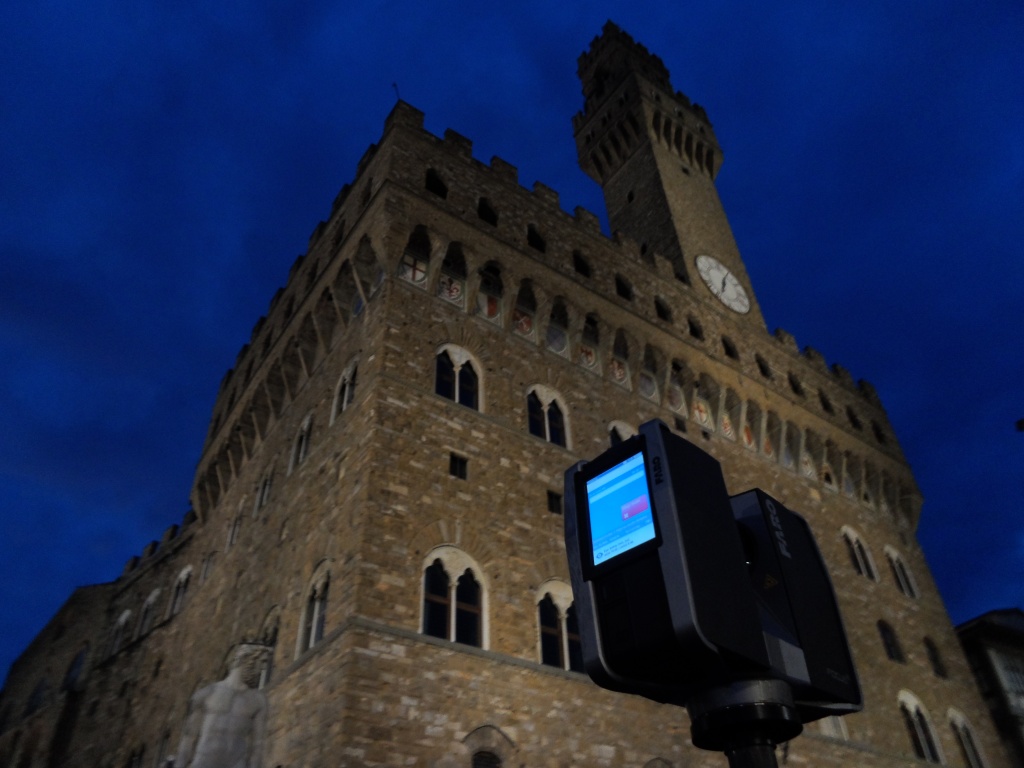 The Faro Focus 3D scanning the front face of Palazzo Vecchio in Florence. 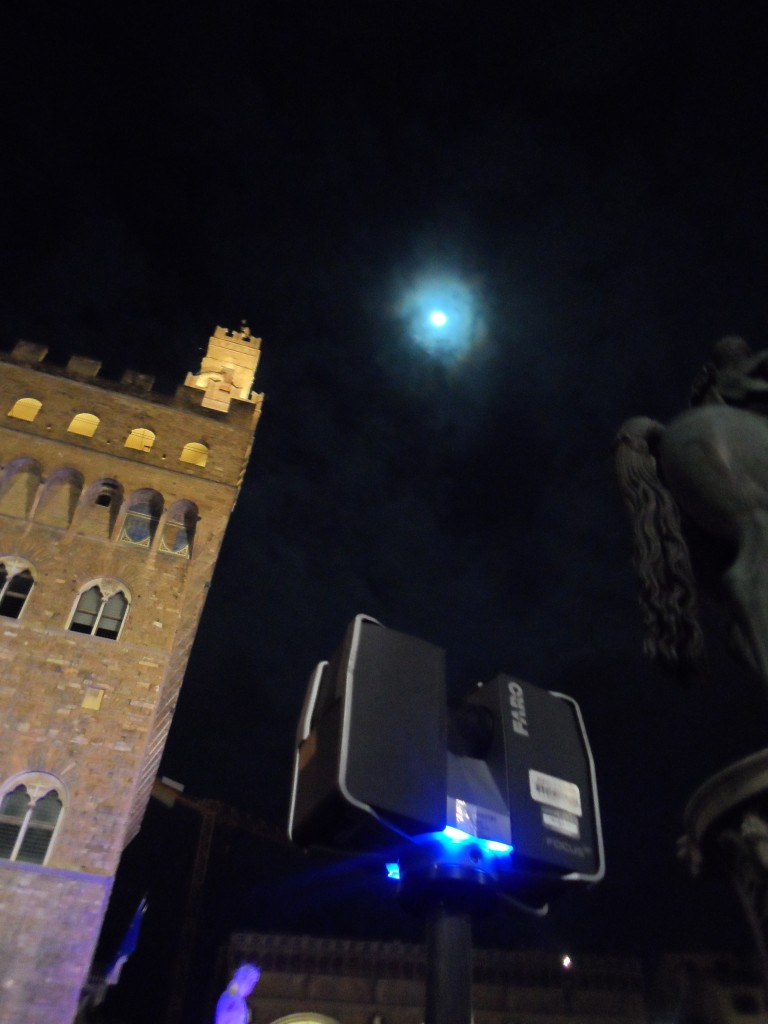 The Faro Focus, the Moon, and Palazzo Vecchio. 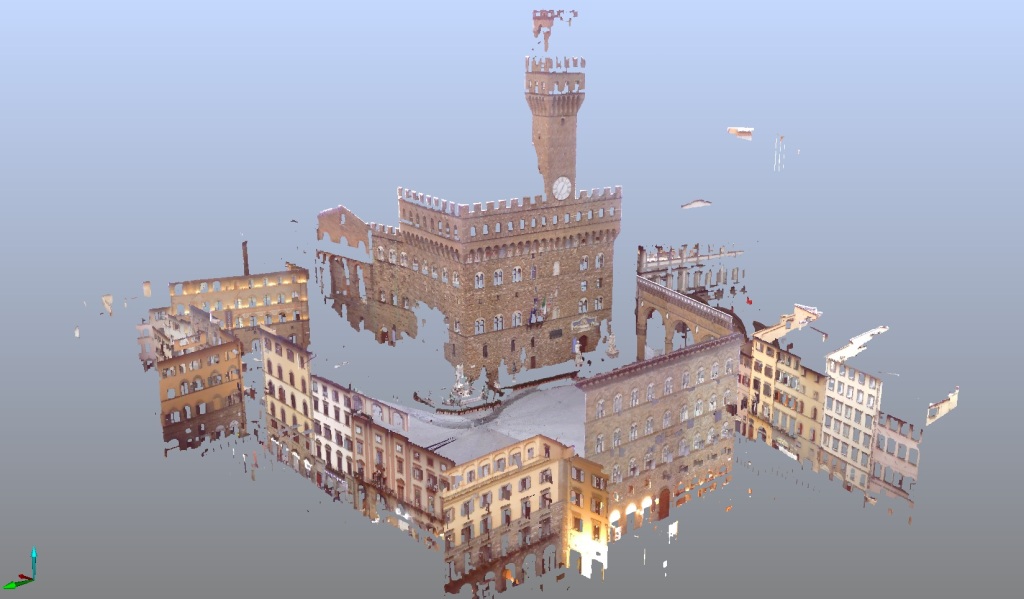 A screenshot of a single scan of Palazzo Vecchio and the Piazza della Signoria in Florence.

In and around our on-going work, much of my nights in Florence were spent not on sleep, but on scanning the exteriors of the monuments we had permissions to work on. Palazzo Vecchio–as the largest monument in size, burned up considerable midnight oil. Eventually, however, the full site was imaged from the outside. As The Piazza della Signoria is a much quieter trafficked area than that around many of our other sites (the square in front of the Duomo Cathedral for the Baptistery) or the smaller streets around Palazzo Rucellai), it was considerably easier to traverse for clean scans.

On the inside of Palazzo Vecchio, we also imaged the suites of rooms on the opposite end from our primary focus in the Apartment of the Elements. And thus I found myself working the laser scanner through the Stanza del Guardaroba or Hall of Geographical Maps–with especial emphasis paid to its large Mappus Mundi globe which we’d like to use multi-spectral imaging techniques to explore the long un-seen surface of. Briefly surrounded by the Palazzo Vecchio cleaning ladies, I was exiled to the nearby suite of rooms and thus imaged the gorgeous Sala degli Gigli or Room of the Lilies, its neighboring Cancelleria (once an office used by Nicolo Machiavelli), and the mural-covered Sala dell’Udienza, the ancient audience chamber of Palazzo Vecchio which contains some of its oldest architectural art and features. 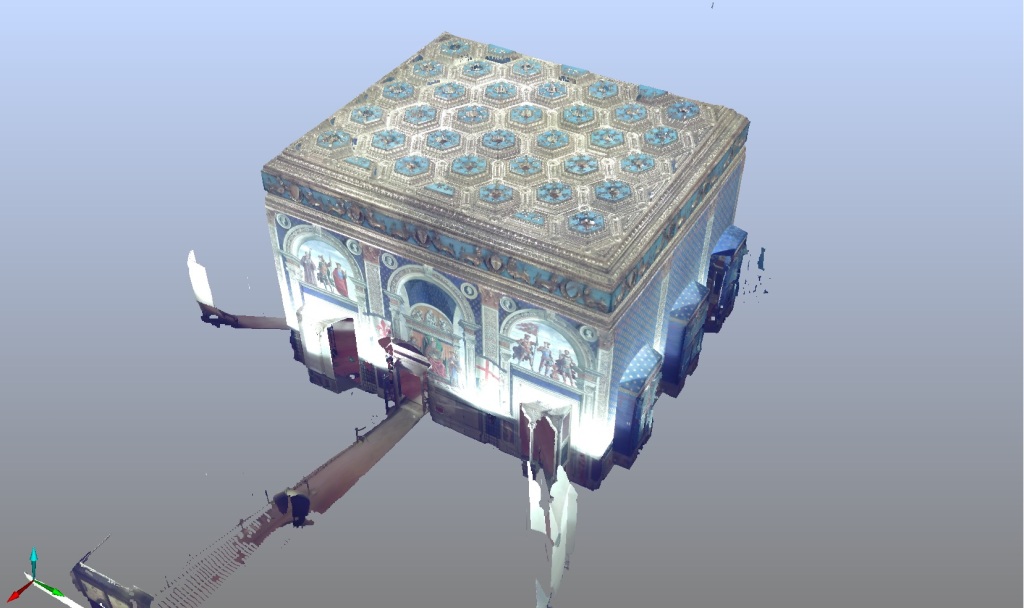 Exterior screenshot of the compiled scans of the Room of the Lilies in Palazzo Vecchio. I am so in love with that ceiling. 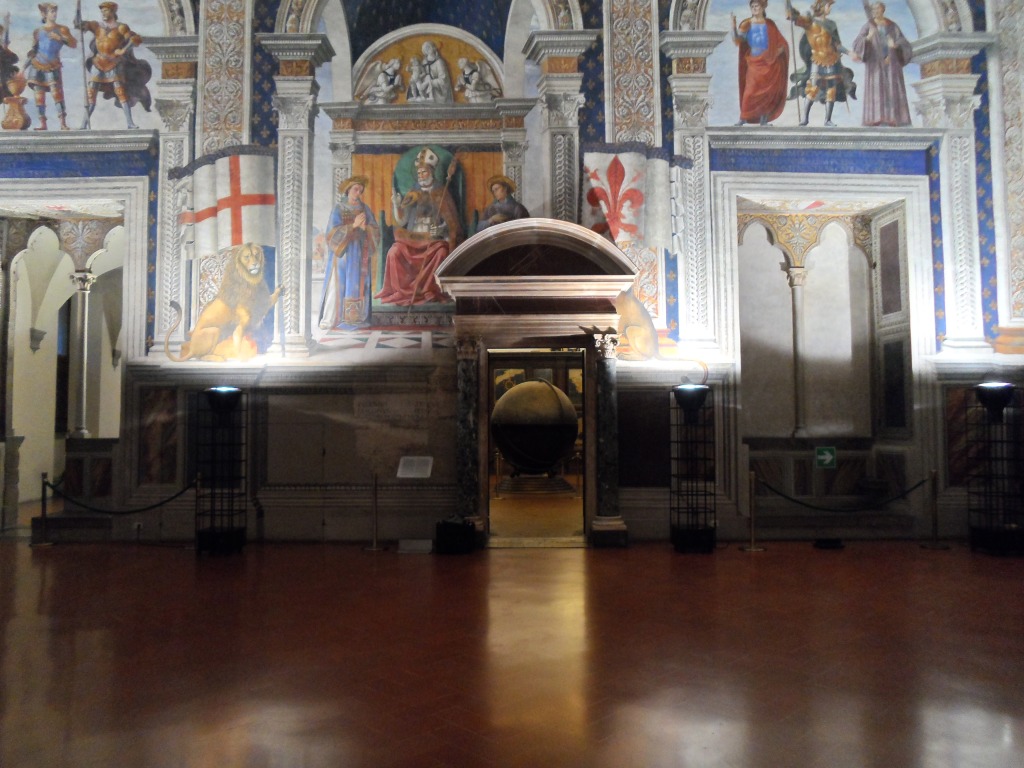 The entry way from the Room of the Elements to the Hall of Geographical Maps and its Mappus Mundi. 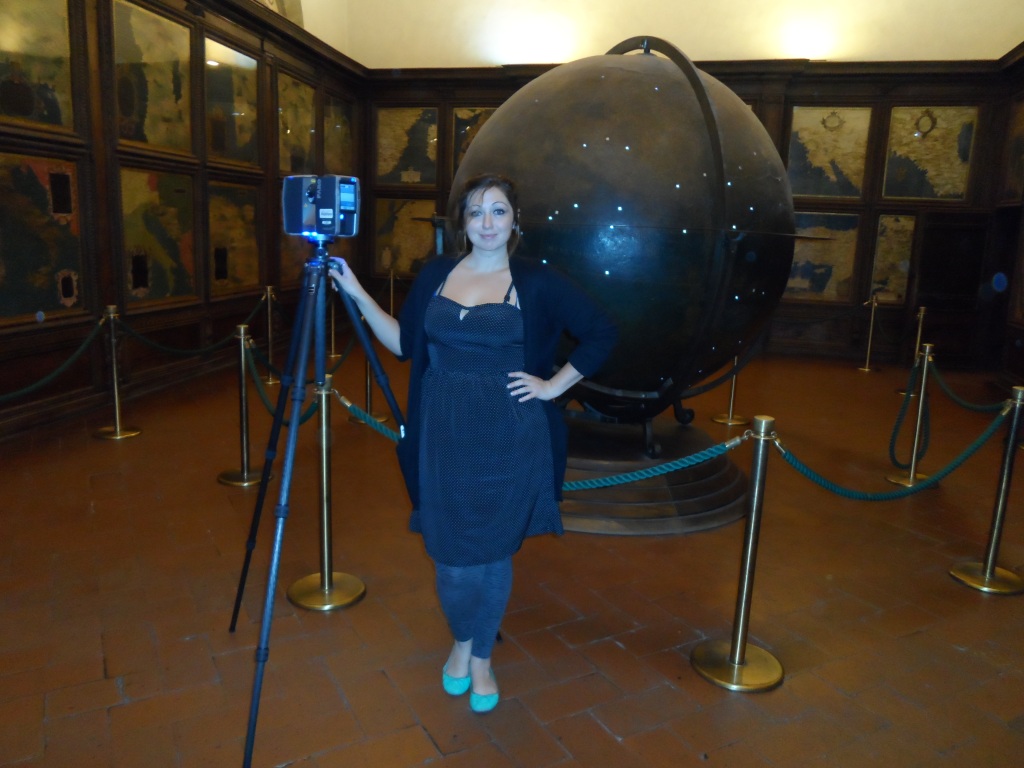 Ashley M. Richter with a Faro Focus 3D after scanning the Mappus Mundi and the Hall of Geographical Maps in Florence’s Palazzo Vecchio. 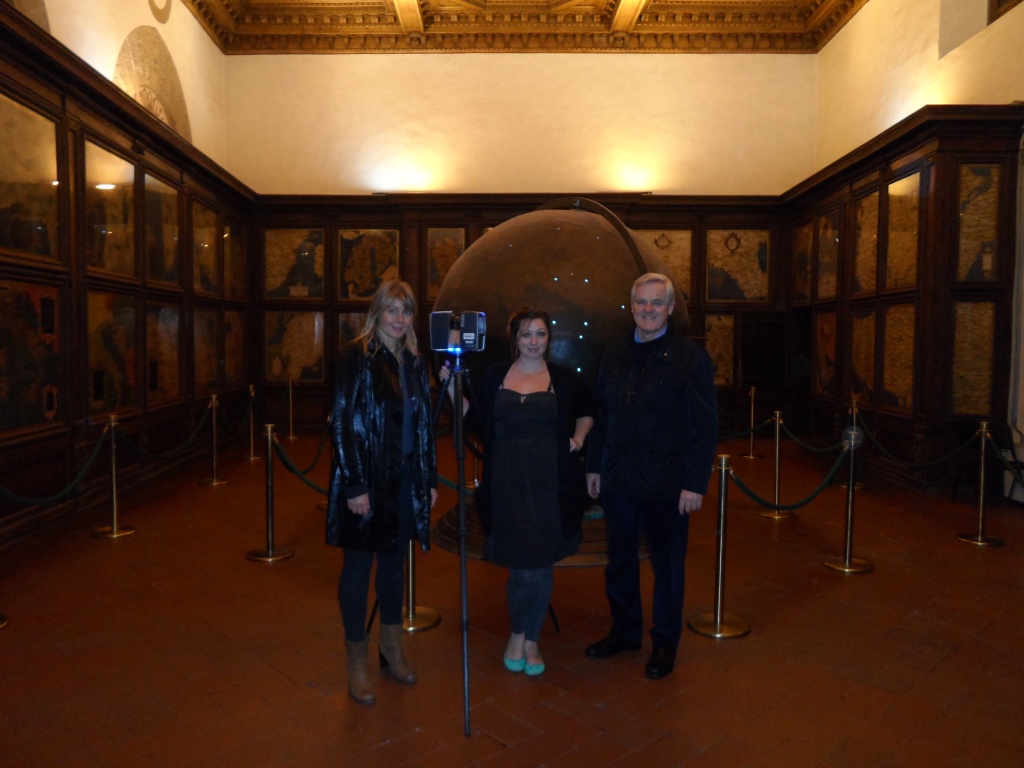 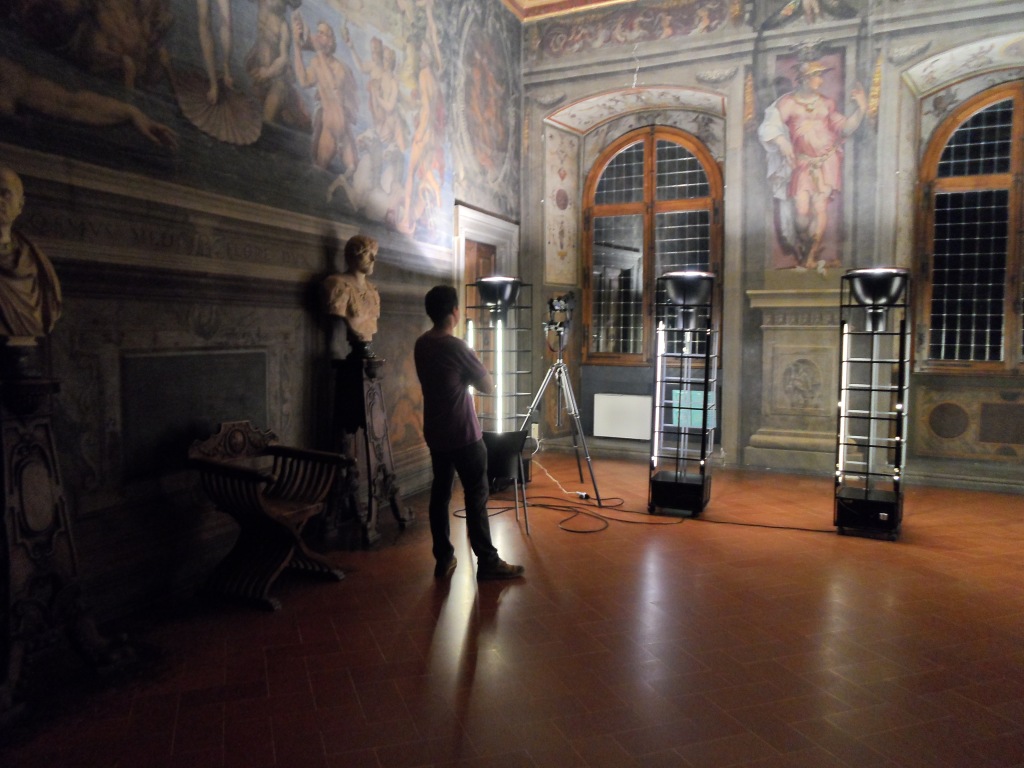 Vid Petrovic Imaging the Room of the Elements in Palazzo Vecchio, Florence.

Our work was in conjunction with on-going efforts for CISA3 on behalf of the University of California, San Diego to undertake a Memorandum of Understanding with the city and its architects to help study and maintain Palazzo Vecchio. This MOU, like the similar agreements with OPA and the University of Calabria which our team successfully brokered in good faith at the time, are up in the air–given the recent disbanding and disorganization of much of CISA3’s actual workforces.

It is sadly, exactly this kind of academic political intrigue, deliberate lack of transparency, and ego-wars going on amongst CISA3s current upper echelons that holds the original vision of CISA3 back, rendering all of the extraordinary efforts put into it by its emeritus director Maurizio Seracini, its staff, and especially its graduate students impotent. It is this kind of mine-mine-mine attitude which plagues the current system of well-meaning collaborative and interdisciplinary work, slowing progress on technology development and the use of technology for cultural heritage.